As a bibliophile and great admirer of the dystopian novel Farenheit 451 by Ray Bradbury and the original 1966 film adaptation, I was surprised at how much I liked the 2018 film remake that shows the story line in a modern context with social media followers, tablets, home video cameras/devices that speak to you and tell you what is going on, and the power of the technology companies. I was particularly surprised by the short mention about multilingualism.

The story line in the recent film is similar to the book and original film adaptation:

Books are banned and people are addicted to technology. Guy Montag, is a fireman whose job is to burn all books. After meeting a young woman and through flashbacks to his childhood, he questions his actions and dares to read the books he is supposed to burn and rebel against society. “Farenheit 451” is around the temperature at which books burn.

There is a short mention in the movie about how complicated the world used to be with people speaking various languages. I think the movie is alluding that the world became monolingual. What a horror! The film also showed how the firemen took away books in Braille from blind people.

Have you seen either film adaptation of Farenheit 451? What did you think? 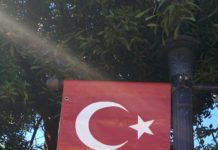 Proposed cuts in funding for foreign language programs in US