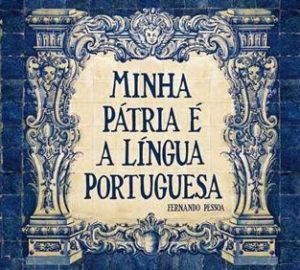 Over two years ago, I wrote about the idea of a language as a homeland as I was starting my journey into the endangered language of Ladino/Judeo-Spanish.

The Portuguese writer, Fernando Pessoa, is quoted as having said, “Minha patria é a língua portuguesa” (My homeland is the Portuguese language).

The Portuguese language is the homeland to millions of people outside of Portugal.

On my recent trip to Portugal, I was constantly reminded of how far the Portuguese language went beyond Portugal and Brazil. As I was eating my chicken in a restaurant, I heard an African couple at the nearby table speaking in Portuguese and some other language. As they were leaving, I asked them which language they were speaking and they told me it was a Creole language from Guinea-Bissau. A Creole is a mix of the local language(s) and the colonizer’s language, which in this case is Portuguese. Haitian Creole is a mix of French with a native Haitian language.

In the US, the only native Portuguese speakers I had ever met were either from Portugal, Brazil or Cape Verde. So this was my first time meeting people from mainland Africa who spoke Portuguese. I have met people from Goa in India or parts of Sri Lanka who have Portuguese surnames because of some Portuguese relative. Portugal controlled parts of India and Sri Lanka. Read here for more information on Portuguese India.

As I walked around the delightful city of Lisbon, I kept hearing more and more people of African backgrounds speaking Portuguese, some in Creole but most of them in European Portuguese. Some of these people of African descent have lived in Portugal since the time of decolonization in 1974, or before or they are descendants of African immigrants and were born in Portugal. 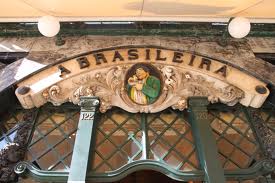 I stopped at the famous Lisbon institution of A Brasileira, a restaurant often discussed in the book, Sostiene Perreira, by Antonio Tabucchi, a great fan of the work of Fernando Pessoa. A few minutes after I saw down outside, a Cabo Verdian music group started playing right in front of me and by the Baixa Chiado metro station. The lead singer, a Portuguese woman, learned Cape Verdian creole and sang in that language.

It was getting a little windy, so I walked down the hill. As I was standing in a bookstore down the street, the sounds of the music wafted in through the doors and I heard the familiar melody of “Sodade” by Cesária Évora sung in Cape Verdian Creole.

The next evening, I went for a walk in the Alfama area of Lisbon looking for traditional Portuguese fado music, not a style of music for one looking for a happy night of dancing! The music is melancholic and speaks of lost love. I happened upon an outside restaurant and sat down to listen to various fado singers. One song stood out to me, Que Deus me Perdoe, made famous by Amália Rodrigues. The young singer, Sara Coito, was wrapped in a shawl, keeping her warm in the night breeze, and sang this soulful song about how important fado music is to keep her feeling the depths of her emotions. If she runs away from fado, she is escaping herself. Here is the translation of the song, May God Forgive me, in English.

Here is a video Sara Coito has on You Tube of a live performance of the song with some audience participation:

We might often think of Portuguese as the linguistic homeland of Brazilians and Portuguese but it is a language that is shared all the way to East Timor, by Indonesia, to Angola, with a few others spots around the world. Each country has its own music and culture. Sad fados are the polar opposite of happy Brazilian sambas. But they all share the same language.

Mind you, the accents are extremely different from European Portuguese to Brazilian Portuguese. Oh my! As my accent is a mix of European and Brazilian Portuguese, I felt like I had a Multiple Accent Disorder when speaking in Portuguese and people often got confused as to where I was from because I’d pronounce words with two different accents in the same sentence! Obviously, Portuguese is not my homeland. My funny accent notwithstanding, I am still very much a fan of the language!