Just because somebody speaks two languages, he/she is not a natural, automatic interpreter and translator. A multilingual person can’t translate anything anybody wants, and can’t do simultaneous interpretation. I have received many requests and demands to translate and interpret on the spot from monolingual people and from multilinguals who aren’t used to being in situations where they have to interpret or translate.

The idea that just because somebody is bilingual that they should make a career as a translator and an interpreter or do it for friends and family as favors is absolutely faulty. That’s like saying, “Oh, I can pull the weeds out of my parents’ backyard so I should become a professional gardener.” Just because I can pull weeds doesn’t mean that I know anything about landscaping or gardening. I just happen to be able to use my hands to pull weeds out of the ground. Just because somebody can do something doesn’t mean that they should be doing it professionally or as a favor.

The difference between interpreting and translating is this: Translation is the written form of converting one language to another and interpreting is what is done orally. So I speak to you in French, the other person speaks in Spanish and somebody interprets between French and Spanish.

When I speak in a language, I’m thinking in that language. Sometimes there are words that people say in a language and I understand from the context what it is that they’re saying but I don’t have an automatic translation for exactly that word. What happens when you interpret or translate is that you have to go from Language A to Language B. But people who are used to being multilingual or have grown up with various languages, don’t interpret in their heads between Language A and Language B. If they’re fluent in both languages, they think and they speak in the language in which they are speaking without interpreting in their minds. Professor François Grosjean discusses how bilinguals think and process language in various of his blog posts on bilingualism in Psychology Today.


News flash: Multilingual people are not natural translators and interpreters.

Interpreting has various layers of difficulty and complexity for the interpreter. It takes the person away from completely being in the moment of listening to what that person is saying because they have to think in their heads what that person has said and how to say it in another language. The untrained interpreter can sometimes lose track of what’s being said because they can’t think of what a word is or they’re trying to understand what the person is saying or what the person said five seconds ago, but the speaker is already on another topic.

One of the complexities of interpreting has to do with the way multilingual people use different languages. Speaking two or more languages doesn’t mean I understand the vocabulary for all sorts of topics in all of the languages. Russian is my first language. If my car has mechanical problems I wouldn’t be able to describe them in Russian but I could in English. My functional automotive vocabulary only exists in English. Multilingual people may have functional fluency in one language but have a different range of topics about which they can speak fluently in another language. Prof. Grosjean describes this as the Complementarity Principle.

I was in Idaho for a symposium and a professor was speaking about the difficulty for people who are born bilingual. She specifically was talking about Hispanics in the United States, who are often forced to interpret for their parents in medical situations and in other situations where they lack the vocabulary. Just because they speak English and Spanish doesn’t mean that they can explain their father’s liver problem to a doctor. Oftentimes, children of immigrants, from all countries, are forced into situations where they have to interpret or translate when they don’t have the vocabulary needed for the specific topic. This has happened to me ever since I’ve been a child. When I lacked the vocabulary needed, it took me a long time to circumvent the topic and try to figure out, using other words, how to relay what the person was saying. Imagine a child interpreter mixing up the words for kidney and liver and the doctor and patient will be speaking about ailments concerning the wrong organ!
One of the difficulties that comes up with interpreting is that oftentimes the speaker, if they’re monolingual and not used to working with an interpreter, will talk very fast and not take enough breaks for the interpreter to translate. Sometimes the speaker will get anxious and will interrupt the interpreter when the interpreter is still speaking. The speaker won’t give enough time for the person who is listening to the interpretation to process the information and ask questions from the interpreter.

Why interpret for someone I don’t want to listen to?

Another key point is that I often am not interested in what the person has to say or I may deem their thoughts asinine. But when I’m forced into being an interpreter in professional and social situations, I have to listen to the person speaking and if the person is long-winded, talking about something boring, insulting or annoying or I don’t agree with them, I’m stuck listening to them. Not only do I have to listen to them, I then have to interpret everything they’ve said, even if I think they’re an idiot or a bigot. I have to then interpret it in another language and deal with the listener’s responses. Sometimes I have to censor the responses of the person to whom I am interpreting because I don’t want to have to deal with an argument between the two individuals. On several occasions, those who have forced me into interpreting have commented that i only gave them a two-sentence summary of the soliloquies I had to endure spoke for five or ten minutes. My response: the speaker kept repeating themselves or gave useless details and I just cut to the chase. 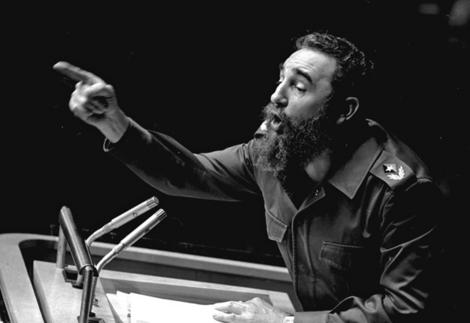 You want me to watch an old video of one of Fidel Castro’s long speeches and interpret for free? You’ll get the Readers Digest one-paragraph summary. If you want to hear his entire sermon, open your wallet, hire a professional and get some strong Cuban coffee because you’ll need it to listen to the interpreter speak for several hours.
No, take that back, I will not listen to Fidel speak for several hours to give a summary. Hire a pro!

What is worse in the situation of interpreting and translating is that many times people like myself are forced into situations where we have to interpret or translate for free and the requesting parties are clueless about how arduous of a process it can be to interpret or translate. I’ve been in other countries where somebody will grab me and say, “Hey, can you tell me what this person is saying?”, “Hey, what’s this?”, “What’s that?”, “I want to know this lady’s life story. Please interpret.” I’m in that country as a tourist or I’m working, just like everybody else. Tasked with interpreting for various people at a dinner when I just want to enjoy my food and talk to a couple of people takes me away from the experience of enjoying life without linguistic mental gymnastics.

The burden of interpreting is so huge that I actually relish being in countries where I don’t speak the language so I don’t get cornered in situations where I am stuck being Ms. Interpreter. When I went to Japan, I was thrilled to be in a country where I couldn’t read the signs or understand anything being said besides a few pleasantries. I could finally hear my own voice!

What I recommend to people is that if you’re traveling somewhere and one of your friends happens to speak the language of the country where you’re traveling, you should discuss with your friend what their limits are in terms of how much they want to interpret. Maybe if they’ve never been in a situation where they’ve had to interpret before, they don’t realize how difficult it is and how frustrating it can be. Have a conversation with your travel partner, even if this person is your spouse, and be honest and say, “Listen, I know that interpreting sometimes can be difficult so you tell me when I’m asking too much.”

With translation, oftentimes people who grew up speaking different languages, like heritage speakers, don’t necessarily have the written skills in order to translate from one language to another. So while they may understand written Spanish, they’ve never studied written Spanish and might be able to translate written Spanish into English. But if they’re not used to high-level vocabulary or legal terms, they might not have the vocabulary to really understand what the text is about and translate it into English. When it comes to translating into their heritage language, which means the language that’s spoken at home by their parents, it’s very often that the person will not be able to translate many legal documents and complicated written forms because they may only be able to write at a simple, elementary school or middle school level because they’ve never been educated in that language. They have oral fluency but not written fluency.

Sometimes people say, “Oh, yeah, I’ll help you translate something,” or, “I’ll help you translate a book,” and then once they start, they realize how difficult it is and that they actually don’t have the skills to translate. That’s why people go to universities and special programs to get licenses and learn how to translate and interpret. Translators and interpreters at the United Nations get paid very good money to do what they do, especially if they are doing simultaneous interpretation. They have to take breaks because it can be mentally exhausting to be interpreting simultaneously. While one person is speaking in Italian, the interpreter has to interpret into English while still listening to the Italian at the same time.


I have an immense amount of respect for people who translate and interpret for a living. I hate the job because I know how hard and exhausting it is.

There are multilingual people who love translating and interpreting and helping out with their language skills. More power to them! In the feature film, The Interpreter, Nicole Kidman plays an interpreter at the UN who became an interpreter after seeing so much violence in her (fictitious) African country. She thought that by using her language skills to interpret between countries at the UN, she would be helping create peace. Blessed are the peacemakers!

Just remember, not all multilingual people find their life’s mission to be to translate and interpret.

Ode to imperfection: why trying to be perfect is counter-productive to...

Living in Italian (Vivere in italiano): A language that taught me...