Last week, for International Women’s Day, I wrote a blog post, How we all benefit when women are multilingual about the scarcity of female language bloggers and You Tube polyglots on the Fluent in Three Months website along with a video of a Skype call I made with two other female polyglots, Fasulye and Jana Fadness, about encouraging female language learners.

Why are role models important for women learning languages?

I didn’t need a role model to learn the languages I did. When I started posting videos on my You Tube channel, I was oblivious to other people on the Internet who were showing their language skills online.

Just because I didn’t need a role model or someone motivating me doesn’t mean that others might not benefit from seeing more women posting videos, blogs or audio podcasts of their language abilities. When the majority of Internet polyglots are male, some of whom are competitive or who leave unprofessional or nasty comments about other polyglots or language learners on the Internet, women may be discouraged from posting their videos or displaying their languages in other ways.

Role models inspire people not to give up. 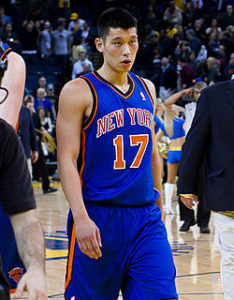 Since Jeremy Lin of the Knicks basketball team in the US rose to fame as he led his team to win many basketball games, there have been many articles about how Lin is a role model for Asian American athletes in sports where there are few Asians. (Ladies Figure Skating does not fall into this category as there are many Asian females.) I read about other Asian American basketball players who gave up basketball because they were never picked for teams because coaches only seriously looked at black and white players. Because of Lin’s stellar performance, other excellent Asian American athletes may not be overlooked anymore by coaches and scouts.

If an aspiring female polyglot sees mostly men posting videos and reads an article such as the one in the New York Times, A Teenage Master of Languages Finds Online Fellowship, or sees the description in Babel no More of several male polyglots being gay, left-handed, artistically/musically talented spectrum, she could possibly feel like an outsider and give up her studies for a lack of fellowship with other multilingual people.

The beauty of speaking different languages is not just being able to speak to various people all over the world, it’s also the pleasure of switching from language to language within one conversation. I cherish the times when I can freely flow from one language to another with someone without censoring myself because the person I am speaking to doesn’t know x language.  Unfortunately, those opportunities are very rare because I know very few people around me who share my same languages. We may have English and one or two other languages in common but that’s it. Having a community of people with whom to converse is key.

I met a female Russian diplomat who told me that the Russian Foreign Ministry was not hiring women anymore because it didn’t want to bother training women who they thought would later leave the job for its low pay and become housewives. She also told me the Ministry barely trained diplomats in exotic languages and left them to their own devices to learn these languages. (I won’t give her name or where we met.) Although it may be true that women leave low-paying jobs to stay at home with kids, this is no reason to discriminate against all female applicants. Not all women will have kids and leave their careers. Men in low-paying jobs may also leave once they get better offers elsewhere.

Let’s say I am a multilingual female university student in Russia and I know that I would have slim chances of working in the Foreign Ministry because of my gender. I like foreign languages and I want to have a job where I can use my languages and see the world. I would appreciate connecting with other female polyglots to see what careers they have and how they get to exercise their languages. This is one of the reasons it’s important for polyglot women to make themselves known so they can guide and inspire other women.

Where are the female and non-white polyglots?

Improving my Portuguese, one (lost) calorie at a time