When my patience wore out, I finally told the Argentine, “Take advantage of being in Brazil and learn some Portuguese! You’re missing out on a great opportunity. Look at the situation, you’re relying on someone whose primary language is English to interpret between two Romance languages. It should be easier for you to understand Portuguese than it is for me because both Spanish and Portuguese are acquired languages for me.”

She said nothing and changed the subject.

This story could have happened with others from Spanish-speaking countries. It’s not just an Argentine-Brazilian rivalry.

I’ve heard from various Spanish speakers that they find the sound of Portuguese to be infantile, a bastardization of Spanish and too nasal. Some have told me that it sounds like a badly spoken Spanish and therefore, they didn’t want to stoop so low as to speak their tongue incorrectly. One Spaniard complained that he didn’t like the way he sounded when he spoke it but he still wanted to speak Portuguese.

1. Portuguese is not Spanish. 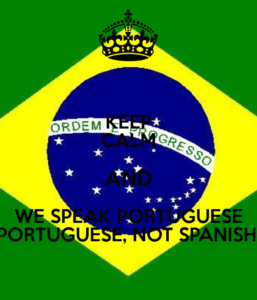 You might think, “Well, duh! That’s obvious”. However, people who speak Spanish (natives and non-natives) don’t always remember that.

They are different languages. One is not a bastardization of the other. Yes, they are very similar, especially in written form. But they are not the same language. Nectarines and peaches are similar. One is furry and the other one has shiny skin. You don’t eat a peach expecting the shiny skin of the nectarine. Don’t expect a neighboring language to sound just like yours.

2. To learn any language, you have to take it as it is.

If you don’t like the feeling of your nose vibrating when you speak, you should give up on Portuguese and many Slavic tongues as they have nasal sounds. If you are better friends with your throat than with your nose, explore those deep guttural thrusts in Arabic and see how those feel.  You don’t have to like the sound of all languages. I don’t. I know other polyglots who have their filters for languages they want to learn.

Getting used to your body resonating in a different way is part of the process of developing good pronunciation in a new language. Or else, you’re speaking a new language with the sounds of your native tongue. That is about as effective as waltzing to  African drum beats.

3. Your language is NOT superior.

I’ve heard the “bastardization” argument made by Russian speakers in relation to the sound of Ukrainian. I’ve heard Ukrainians quip back that Ukrainian is more melodic than Russian, almost as melodic as Italian, and therefore, superior to Russian.

You are not your language. Just because you like the language of the country you happen to have been born into better than others, doesn’t mean that you, as a speaker of that language, are any better of a person than others who speak languages you find to be less appealing. Too many times, people identify with their native language, or even adopted language, in a way to exclude others and exert their feeling of superiority. You could have been born in your neighbor’s country and grown up speaking what you think of as the bastardization of your language.

Growing up in the US, I heard people in the Soviet immigrant community complain about the paucity of English vocabulary compared to the richness of Russian. Mind you, those who were lamenting the poverty of the English language did not speak the language super well and did not have a dexterous command of the English dictionary themselves. They claimed that Russian translators improved the work of the foreign literature they translated into Russian because of the superiority and wealth of the Russian language. “Claim” is the key word here. Those spreading this urban myth of the alchemism of Russian translators couldn’t read the original works of literature in French, English or German and truly judge the semantic differences between the original and translated texts. I posit they were just spreading rumors to stick their noses up at Americans and make excuses for their not having learned the inferior language of English that surrounded them in the US.

Native English speakers are known to be hostile and obstinate to learning language because of the omnipresence of English and the economic prowess of their countries. There have been many media pieces in the UK about how the British economy is losing millions of dollars a year because their aren’t enough foreign language speakers to help British companies export. Don’t take your economic superiority too seriously or you may be out of a job!

BBC interview about how and why the UK is losing money because of its lack of foreign language speakers.

If you fashion yourself Ernest Hemingway or Jorge Luis Borges’ incarnate and therefore exempt from learning an “inferior” tongue, let’s do a reality check.

Where’s your Nobel Prize for Literature?

Where are the bookshelves of tomes in your name worthy of mention?

Ernest Hemingway spoke French and Spanish. (He may have also spoken Italian.) Jorge Luis Borges spoke English and French. If it hadn’t been for Hemingway’s ability to communicate in Europe, he would not have been able to write in so much detail about the Spanish Civil War or the expat lifestyle in Paris in the 1920s. Borges was a consummate reader. He was also a librarian. His vocabulary and imagination were not just fueled by his native Spanish but also by the foreign literature he read. The authors whom we put up on a pedestal and show off as our national literary heroes are often bilingual, if not, multilingual. Haruki Marukami, probably the most popular Japanese author known in the US, used to translate F. Scott Fitzgerald’s literature into Japanese.

If the literary greats of your language and country were multilingual, then why aren’t you?

I hear people make all sorts of excuses for why they don’t make the effort to learn a new tongue but the language superiority one is the excuse that probably bothers me the most because it is based in snobbery and ignorance.