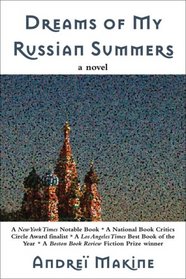 Rare is the book which envelops my attention, delights me in its prose, makes me re-read passages both for the joy of the flow of the sentences and for the content and strikes a chord with me personally. Le testament français (UK edition)/Dreams of my Russian Summers (US edition) not only had all of the aforementioned effects but it also made me get out my pen and underline key sentences and make notes. I hadn’t done that since my college years.

The story is fictional. It’s about a teenage boy in Siberia in post-World War II Russia who learns about pre-Revolutionary Russia and Paris before World War I from Charlotte, his French grandmother. He learns about the opulence of the Tsar’s visit to France in French. Via the French language, he feels as though he enters into another world, one whose words he doesn’t even know in Russian.

The author, Andrei Makine, is a Siberian novelist who writes in French and has been living in France since he defected from the former Soviet Union in 1987.

While devouring the book, I often recalled my own discovery of the riches of pre-Soviet St. Petersburg via a French novel, La gouvernante française, written by a Russian-French author, Henri Troyat. Before my first return to Russia, I went to the French section of my local library and chanced upon, La gouvernante française, a novel about a French governess working for a rich Russian family right before the Russian Revolution. The backdrop of the Revolution and political upheaval set the story of the governess’ awakening in St. Petersburg. I was learning about my own country in French, not in Russian, similar to how the protagonist of Dreams of my Russian Summers learned about Tsarist Russia.

Via the French language, France became the protagonist’s Atlantis, a mythical land.

Charlotte’s Atlantis had enabled me to glimpse the mysterious consonance of eternal moments. Without my knowing it, they had traced the pattern of another life, invisible, inadmissible, alongside my own.

Even a Russian word changed meanings when said in French:

“Perhaps this double vision could be explained by my two languages; thus, when I pronounced the word ‘царь’ a cruel tyrant rose before me; while the word ‘tsar’ in French was redolent of lights, of sounds, of winds, of glittering chandeliers, of the radiance of women’s bare shoulders, of mingled perfumes, of the inimitable air of our Atlantis.”

Language as an escape

Stories in French evoked a past that was more real to him than his present day Siberia. (Granted, Soviet Siberia probably gave people many reasons to seek a mental escape, whether via literature, music, the arts or controlled substances like alcohol.)

Why does an autumn morning in Cherbourg a hundred years ago, yes, a moment I have never lived through, in a town I have never visited, why do its light and breeze seem to me more alive than the days of my real life?
……………

It was Charlotte who had taught me to pick out Parisian silhouettes in the midst of a great industrial city on the Volga; it was she who had imprisoned me in this fantasy of the past, from whence I cast absent-minded glances at real life.

From what my parents have told me about growing up in the former Soviet Union, literature was indeed a vehicle out of the drab and repressive reality of the Communist regime. Soviets read books voraciously and studied maps of foreign cities to the point that they knew the street plans of Paris better than native Parisians. They did this in an effort to mentally leave the everydayness of their existence. But I had never heard of language being a mental airplane out of the Iron Curtain. Makine’s novel brought me to a deeper understanding of the power of language to let us dream and escape when we need to.

Life is different in French

When learning about the French President Félix Faure dying in the arms of his mistress, the protagonist realizes that this taboo of having a lover would never be discussed openly in Russian, but was completely natural for his grandmother to discuss with him in French:

“No Russian babushka would venture into such a discussion with her grandson. In this freedom of expression, I sensed an unaccustomed perception of the body, of love, of relationships between a man and a woman – a mysterious French ‘outlook’.

To my great surprise, rerun in Russian, the scene no longer made a good story. It was actually impossible to tell! Censored by an inexplicable modesty of words…

‘No’, I said to myself stretched out in the rippling grass under the warm wind, ‘it is only in French that he could die in the arms of Marguerite Steinhell…’

He spends some time in his teenage rebellion rejecting the French world of his grandmother and when he meets with her again after some time of separation, he feels like he is speaking in French as a foreign language. His change in character had altered his ability to speak in French. His next conclusion about being in between Russian and French is one that I believe reverberated in me more than all the others:

Strangely, or rather, quite logically, it as at moments like this, when I find myself between two languages, that I believe I can see and feel more intensely than ever.

He asks himself later in the book, “Suppose one could express this language in writing?” Oh how many times have I asked myself the same question, only to be met by the reality that if I write how I think, few people will be able to follow my jumps from one tongue to another!

I think that for those who are conscious of how differently we express ourselves in our languages and how each language resounds with us, we have felt this aliveness, if not confusion, that comes with living between languages. I did a video series in Russian, French, Spanish, Italian, Portuguese and English about the resonance of languages and I explained how each language makes me feel. But it is precisely when I can speak with people who know more than one of the languages I know, that I can fully express myself because my thoughts change languages mid-sentence, depending on which language best captures what I mean to say. The mental switching of languages brings an awareness and intensity of perception unbeknownst to monolinguals.

Don’t get me wrong or misquote me, please. It’s not that monolinguals don’t have profound thoughts or feelings. There are monolinguals who have more powerful sentient experiences than bilinguals or polyglots. However, it is for those multilingual people who are conscious of how their mind is dancing, switching or jumping from one dictionary to another that the world can be felt at many levels, piercing through the limitations of one language and rejoicing in the more appropriate words of another.

Language preserved in amber, in isolation

As the protagonist only saw his grandmother during the summers, he spent the rest of the year only conversing in Russian and dreaming in French in his mind. When he returned to see his grandmother, her French-ness was preserved intact in her isolation in Siberia, even with her pre- World War I “Belle Époque” flavor. By speaking to his grandmother, he was hearing her speak in a French that her contemporaries in France would no longer use because the language had evolved in the decades since her departure from France after World War I.

This reminds me of a funny episode when I first encountered the differences between my modern Russian lexicon and that of Tsarist Russia. My parents took me to a Russian festival at Fort Ross, a former Russian installation, in Northern California, there were Russians there who were descendants of the White Russians who had left Russia during the Bolshevik Revolution and had settled in the United States. A boy was telling his grandmother in old pre-revolutionary Russian that he couldn’t find his underwear. Instead of using the modern Russian word, трусы, he said, подштанники. I laughed because I understood what meant, it literally meant “underpants” but I had never heard the word before. My parents had to explain to me that before the revolution подштанники was a commonly used word. My sister reminds me that I kept repeating the word in the car ride home!

Russia via a French novel in British English

One may ask why I was reading this book in English and not in French. The author and I share a mother tongue. He wrote his novel in French, my third language. Yet I was reading his book in a British English translation — one small step removed from my American English. I was on vacation abroad and found his book in a used bookstore. There was no French version. Despite the linguistic distance between the original version and the one I was reading, I loved the flow of his writing and the vivid details of Siberian life and pre-World War I life in Paris and Russia. I look forward to reading his other books in French to see if they flow as well for me.

This was actually the second time I had read one of Makine’s books in British English and not in French. The first was Once upon the River Love, about Siberian boys reveling at the romanticism and adventure of the movies of Jean-Paul Belmondo. I remember clearly his descriptions of how the boys walked in the snow to get to the movie theater to re-watch a Jean-Paul Belmondo movie.

(On a side note, I find that when I read a book translated into British English, I perceive some awkwardness or something odd about the English. But when I read a book or article written by a native English speaker of another anglophone country, including England, I don’t feel anything strange. The language just flows.)

Do you have similar feelings of being in between languages in your mind?

Does the world feel different depending on which language you are using?

Does the same word mean different things for you in different languages?

Do you have a language that transports you to a mythical or long-lost world?

Music can bridge the income gap in education