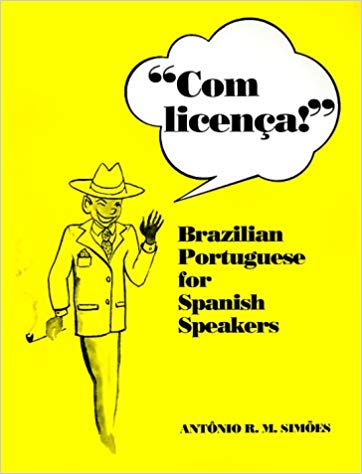 While driving to work, I listened to the KSQQ Portuguese radio for the Portuguese Community from the Azore Islands residing in Silicon Valley in California. I listen to advertisements for funeral homs, fish restaurants, and small stores that imported Portuguese and Brazilian products. Even though I am not Catholic, I also listened to Catholic mass in Portuguese. 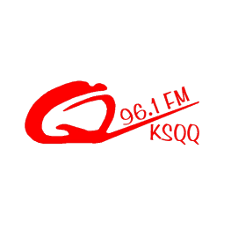 A few months into studying Portuguese, I went with my family to Lisbon for four days and was enamored with the beautiful old architecture, the fado music and the many types of grilled fish. Even small family-run bakeries had beautiful walls with Portuguese azulejos (tiles). The entire city was a delight! I was fine communicating in my limited Portuguese or sometimes in Spanish.

When I moved to Argentina, I traveled to Brazil several times and had no trouble communicating in Portuguese, even though I hadn’t done anything to keep up my Portuguese while in Argentina. When I was with Argentines in Brazil, I saw that the Argentines had a much more difficult time understanding Portuguese than the Brazilians did understanding Spanish, even though Spanish and Portuguese have a lot of similarities. The Portuguese language has sounds that Spanish does not have. For example, in Brazilian Portuguese, if there is a double r (“rr”) in the middle of the word, it is pronounced as a hard “h” — a sound that doesn’t exist in Spanish. Portuguese has many nasal vowels that don’t exist in Spanish. A Spaniard once told me that he didn’t like speaking through his nose when speaking in Portuguese! I laughed and told him that if he wanted to improve his pronunciation, he’d have to get used to speaking through his nose.

Several years after living in Latin America, I wanted to improve my Portuguese. I enrolled in a once-a-week Portuguese class in Adult School, taught by a Portuguese woman who tried to speak in Brazilian accent. Some of the students spoke more Spanish or Portunhol (a mix of Portuguese and Spanish). We had short writing assignments and we had class discussions. There were only a couple of us who could actually communicate in Portuguese. It was a fun way to spend my Wednesday evenings, but the class didn’t improve my Portuguese that much.

Some Italian roads (and one French one) lead to Portugal

I first got introduced to Portugal in the Italian language. The boyfriend of my Italian language conversation partner lent me the book, Sostiene Pereira (Pereira Mantains), by Antonio Tabucchi. The book was about a Portuguese journalist, Pereira, in Lisbon around 1938 who dedicated himself to writing about literature. He thought he could isolate himself from the political realities of the Salazar dictatorship in Portugal and rising fascism in Europe by focusing on literature. But his friendship and professional relationship with a young Italian Communist man who had fled Italy because he had been persecuted under the fascist regime of Mussolini made Pereira realize that it was important for him to use his role as a journalist to inform his newspaper readers about the horrors of fascism in Europe. The book made a strong impression on me as it emphasized the value of speaking up and using one’s power in the Fourth Estate to bring light to injustice. 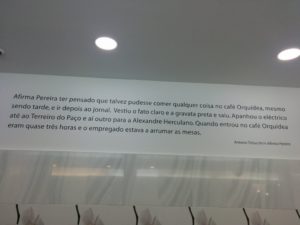 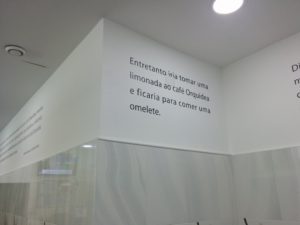 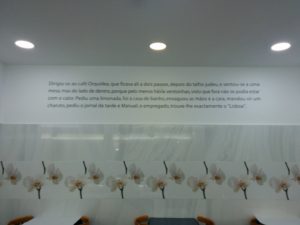 Quotes from Affirma Pereira (in Portuguese) by Antonio Tabucchi in Café Orquídea in Lisbon, Portugal.

A year after reading the book, I was in Mendoza, Argentina and watched the film version of the book in Italian with Spanish subtitles. The Italian film legend, Marcello Mastroianni, played Pereira. From the fado music composed by Ennio Morricone and sung by Portuguese fado singer Dulce Pontes, and scenes of the journalist sitting in front of Portuguese tiles and sitting in his favorite Café Orquídea, I felt like I was back in Lisbon. 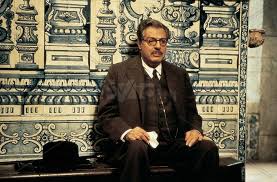 Marcello Mastroianni sitting in front of a tiled wall in the film, Sostiene Pereira

When living in Buenos Aires, I was reminded of the book and film when people spoke of the restaurant called Sostiene Pereira in the city. (I never ate there.)

My cinematic discoveries in Argentina about Portugal via Mastroianni did not begin and end with the movie, Sostiene Pereira. The next time I saw Mastroianni in a film about Portugal, it was on a weekday in a movie theatre on Corrientes Avenue in Buenos Aires. This time it was in French and not Italian! Mastroianni acted in the French film, Le Voyage au Début du monde, about a French film actor visiting the Portuguese village his father was from. 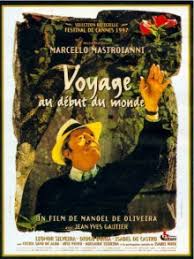 A few years later, I attended a screening at the San Francisco Istituto Italiano di Cultura (Italian Cultural Institute) of a film about a Portuguese man returning to Portugal in 1974 because he wanted to witness the crowds of people cheering for the fall of the Salazar regime. He arrived at a big square in Lisbon and was disappointed to see very few people. (I think the movie was in Italian and Portuguese, but I can’t find the title.) 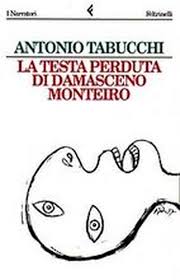 Recently, I read another Antonio Tabucchi book set in Portugal, La testa perduta di Damasceno Monteiro (Missing head of Damasceno Monteiro), a murder story in the original Italian. It was a fantastic linguistic and cultural journey for me to imagine Lisbon, a city I adore, and Porto, a city I have yet to discover, through Italian prose. I stopped many times and smiled at how beautiful and unique this experience was to imagine Portugal in Italian, and not in Portuguese or English. I rarely speak, read or write in Italian, and it’s been a couple years since I last read a book in Italian. It took me a day to get used to reading in the language. It dawned on me that this was the second time I was mentally traveling to Portugal via Italian, my fifth language. Oddly, I don’t mix Spanish and Portuguese as much as I mix up Portuguese and Italian, even though Portuguese and Spanish are more similar than Portuguese and Italian. I wonder if having been introduced to Portuguese life via the Italian language has something to with why I sometimes confuse these two languages. My occasional mixing of the two languages may also be because I have never “lived” in Portuguese and Italian. I don’t have as tight of a grip on either tongue as I do with French or Spanish, languages I’ve “lived.”

I took different roads to learn Portuguese and as a result, my life has become enriched by knowing this beautiful mellifluous tongue.

Even the Ivy League cheats students on foreign language education

How memory helps you learn language