My father’s hearing aid batteries died. He was in the emergency room (ER). The doctor was asking questions. My mom, sister and I had to interpret for my Dad but he couldn’t hear us.

The doctor said, “This app is a miracle!”

When you’re desperate in the hospital, you don’t care about Google Translate’s “creative” translations, weird word choice or that Google Translate translates your words to your father in the formal tense instead of the informal tense or mistakes your gender. If you do care, then your priorities are in the wrong place!

Since that episode, I had many other experiences with my father’s faulty hearing aids and used Google Translate to communicate, sometimes with comical translations. 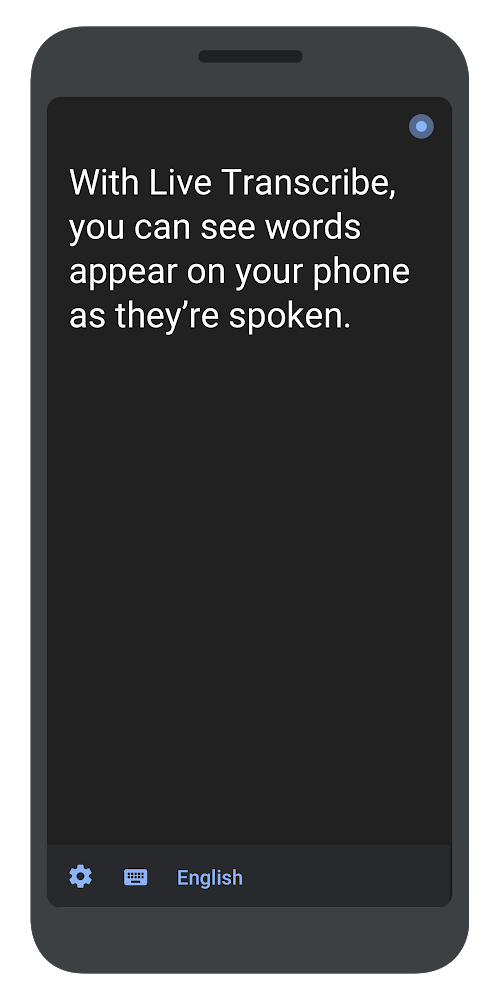 In February, Google came out with the Live Transcribe app that does live transcriptions for conversations in 70 languages using speech recognition technology. This app has revolutionized the way I communicate with my father when he can’t hear me. Instead of saying one sentence at a time in Google Translate, I just leave the Live Transcribe app on and my Dad reads our conversation in real-time. The text appears on the screen as we speak. It works very well in Russian! Sometimes the app displays the wrong word. I need to read what my Dad sees and show him when a word is incorrect. Sometimes, I have to repeat the word several times before the correct transcription appears. If the right word doesn’t appear, I tap on the keyboard button and type the word I need. The app is free but only works with an Internet connection.

How do other people in similar situations communicate on a daily basis?

Even before my father’s age-related hearing loss, I was curious about how deaf and hard-of hearing (DHH) people communicate. Anywhere from 37 to 140 out of every 1,000 people in the United States have some kind of hearing loss. Either you or someone you know needs or will need assistive hearing devices. (If you listen to music at a high volume, beware about your potential hearing loss.)

I am relaying what I have learned about how American Sign Language (ASL) and written and spoken English are different. I show some ways the deaf or hard-of-hearing use technology to communicate with each other and with people in the hearing community and the problems or missing features with these technologies. I also provide some information about upcoming technologies.

I am new to this topic and am in no way an expert of DHH communication. I am just offering what I have learned. If you know of other effective technologies, please write a comment.

I visited Gallaudet University in Washington DC. It’s the only four-year college in the US for the deaf and hard-of-hearing (DHH). Half of the staff is deaf, and half is hearing. All staff know American Sign Language.

While walking around the campus and the surrounding area, I saw many people signing. I am used to being in places where I can’t understand the language spoken, but sometimes I can pick up a couple words or make out what people are saying by their expressions. But ASL was so totally foreign to me that I couldn’t interpret any of the signs. I felt like I was a foreigner in my own country! I walked into an Ethiopian restaurant. Instead of hearing the Amharic language spoken, I saw people using sign language. 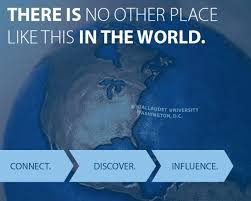 Gallaudet University, There is no other place like this in the world

Structures of American Sign Language (ASL) and English are different

You’re deaf. ASL is your first language. You have to learn how to write and read in English as a new language. Since you don’t hear spoken English, your only way of learning English is by reading. You’re at a disadvantage to hearing people who learned English since they were infants by hearing the language.

English: The girl throws the dog a bone.

Literacy rates among the deaf are low because it’s hard to learn written English when the structure of ASL is different from written English. People who are born without being able to hear, don’t hear English spoken so they don’t learn English like other children do by listening to their parents, friends and family speak in English.

Written English is not a universal option for the deaf.

Not all deaf people will successfully communicate via written English.

Many people with hearing disabilities rely on human ASL interpreters. Apps that allow for text chatting and voice-to-text features may not appeal to all DHH users because they don’t incorporate ASL.

I don’t know if the structures of other languages have vast differences between their written and signed languages. If you have any information about this, please add a comment below.

Did you ever wonder why emergency announcements on TV usually have an ASL interpreter rather than just closed captioning (text in English at the bottom of the screen)?

It’s to make sure that all deaf people can understand what to do during the emergency.

Lydia Callis’ dramatic ASL to describe the severity of the hurricane made her famous and took the attention away from the mayor.

In classroom settings, where mixed groups of DHH and hearing students are supposed to work in groups and ASL interpreters may not be available, hearing students speak into an app like WhatsApp with Automatic Speech Recognition (ASR) that converts speech to text.

Video chats via Skype, FaceTime and other video messaging platforms are preferred, rather than text or instant messages because the DHH want to see each other on screen and use sign language. With video calls, you can have a three-way call and add a sign-language interpreter to communicate between hearing and DHH people. This is easier to do on a desktop computer or laptop because you can more easily see the different people on screen (the interpreter and the person you are calling). 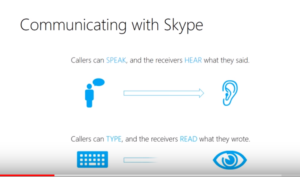 Video on how to use Skype Translator Preview:

Problem: This can be expensive if people are not using Wi-Fi and are using mobile data on their phones to use Skype Translator. Some people may also like asynchronous (not live) video messaging to send video messages to friends/family to watch when they want to rather than doing a live video chat.

What if you’re DHH and need to call a store, such as Target, to place an order and communicate with a hearing person over a telephone call? You can’t call Target and do a video call via Skype with an ASL interpreter. Unless you have a friend, family member or caregiver nearby who knows sign language and can interpret for you, which technologies can you use to make a phone call?

The Telecommunications Relay Service (TRS) is a telephone service that allows persons with hearing or speech disabilities to place and receive telephone calls. When a person with a hearing or speech disability initiates a TRS call, the person uses a teletypewriter (TTY) or other text input device to call the TRS relay center, and gives a communications assistant the number of the party that he or she wants to call. To use this service, the DHH person has to have a TTY, which he or she wil most likely have at home.

How do you make a call to Target when you are not at home or if you don’t have a TTY? 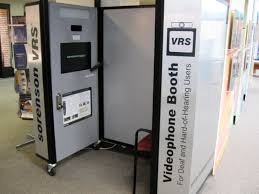 If you have a delicate or private conversation, you have to be comfortable with the sign language interpreter knowing the contents of your conversation.

2. Google is also working on Live Relay, a program to translate text into speech for live phone calls. “Live Relay uses on-device speech recognition and text-to-speech conversion to allow the phone to listen and speak on the users’ behalf while they type.” This program is still in the research phase.

3. Article with resources for home additions for the deaf and hard-of-hearing.

4. Tips for driving with hearing loss

As I wrote before, I am not expert and this post is not meant to be an exhaustive list of all the resources available or of all of the communication difficulties that exist.

If you’d like to learn more about deaf culture, I recommend Train Go Sorry, written by a hearing woman who grew up in a boarding school for the deaf and hard of hearing in New York that was run by her father.

I look forward to learn more about DHH communication.

Do you use other technologies that help you communicate? Please add your comments below!

How deaf people can learn foreign languages with music