The limbo land of being a heritage language speaker is one I’ve been inhabiting most of my life. It’s only recently that I’ve known the term “heritage speaker”, referring to those of us who have learned our native language at home but with little to no formal schooling in the language. We may speak without a foreign accent but we make grammatical mistakes and lack certain vocabulary. Some of us speak the language with ease but with an accent. When we go to the country where our families are from, people look at us funny when we speak. We may look native and sound like a local until we make some simple grammatical mistakes or stall for elementary words that we don’t know or can’t remember.

Recently, I was in Kyrgyzstan, a Russian-speaking country in Central Asia. I look Russian and I speak the language fluently but my linguistic errors are apparent. As I left Russia when I was three years old, I’ve never studied in the former Soviet Union. My parents taught me to read and write in Russian before I attended kindergarten in the US. I took some language classes but I didn’t pay attention as the declinations and conjugations went in and out of my mind. Genitive case, nominative case, blah, blah, blah. I couldn’t have cared less when in Russian classes.

Feeling at home, but not quite

Bishkek (formerly Frunze) is a very Russian looking city. I often had to remind myself that I was in Asia. Many signs are in Russian and Russian is spoken widely throughout the city. Although the ethnic Russian population of the country has decreased since the fall of the Soviet Union, there are still (white) ethnic Russians amongst the Central Asian faces on the street. (The other white faces are the few Russlanddeutsche, the ethnic Germans Catherine the Great brought into the Russian Empire.) 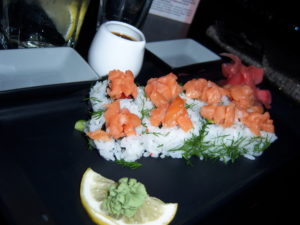 Even sushi with dill seems familiar to me as I’m so used to dill on Russian dishes. I’m even in culinary limbo between Japanese and Russified Japanese food.

Being in Kyrgyzstan was linguistically easy for me because I got by easily in Russian. I felt very much at home there. The food (cottage cheese filled blini and dill laced salads) at breakfast were like being at my mom’s house. Surrounded by familiar cuisine and my home language, it seemed odd to me to be speaking in Russian to the internationals who were with me because it came more naturally for me to revert to my native tongue.

Looking native, but not getting all the nuances

On my last day in Bishkek, I went into an Internet cafe to print out my boarding pass and hotel reservation and came face to face with a problem heritage speakers often face when returning to a country where their home language is spoken: misunderstandings based on passing for a local.

I saw on the price list that the per hour price was different for word processing and Internet use. I asked the young man at the desk how much it would cost to use both Microsoft Word and the Internet and he quoted me the (higher) Internet hourly rate and indicated which computer I should use. I went to that terminal and saw that there weren’t any Internet browsers available. I returned to the young clerk and explained that I couldn’t get on the Internet. Annoyed, he looked at me and said angrily, “You should have told me in the first place that you wanted to use the Internet as well as type”. Obviously, we had a misunderstanding. He then reconfigured the pricing structure on the assigned terminal and sent me back to the computer. I was not used to using Microsoft Word and the Internet browser with Russian language menus and it took me some time to familiarize myself with the options and vocabulary. When I wanted to print my boarding pass and hotel reservation, there was no printer to chose from in the print screen. Again, I returned to the clerk who gave me a weird look, as though I should have known better. He told me I had to save my files to print in the “My Documents” folder and then return to him and tell him the file names for him to print from his terminal. I had forgotten that many Internet cafes in the former USSR work this way and that one can not print directly from their terminal.

After leaving the Internet cafe, I realized why the clerk was so rude to me: he thought I was local and knew how things worked. Besides the usual ignorance of courtesy and customer service in the former USSR, I think the clerk had no inkling that his customer (me) was a foreigner and didn’t know how Internet cafes are run. Had I spoken with a heavy accent or in poor Russian, he would have automatically understood that I was not local and may not know the procedures.

Being Bilingual May Boost Your Brain Power

Famous Women who speak foreign languages, Do you know of any?