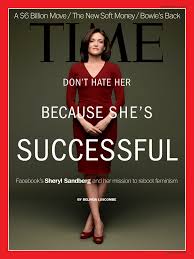 The TIME Magazine “Confidence Woman” cover story on Sheryl Sandberg, the Chief Operating Officer of Facebook, and her new book, Lean In, about women, success and careers made me very angry.  The article reinforced what I was already suspecting was the explanation for why we don’t see more female polyglots being public about their foreign language successes.

Translate this into foreign language skills and this is the picture you see. While many foreign language classes have more females than males, we see more men than women on the Internet showing their language abilities. Women play down their abilities while men are taught that it is good to show off or at least be public about their accomplishments.

Read this excerpt from Sandberg’s new book Lean In about the double standard that pervades the way a powerful woman is viewed in society vs how a man with the same traits is lauded by his peers.

In 2003, Columbia Business School professor Frank Flynn and New York University professor Cameron Anderson ran an experiment. They started with a Harvard Business School case study about a real-life entrepreneur named Heidi Roizen. It described how Roizen became a successful venture capitalist by using her “outgoing personality … and vast personal and professional network … [which] included many of the most powerful business leaders in the technology sector.” Half the students in the experiment were assigned to read Heidi’s story. The other half got the same story with just one difference—the name was changed from Heidi to Howard.

When students were polled, they rated Heidi and Howard as equally competent. But Howard came across as a more appealing colleague. Heidi was seen as selfish and not “the type of person you would want to hire or work for.” This experiment supports what research has already clearly shown: success and likability are positively correlated for men and negatively correlated for women. When a man is successful, he is liked by both men and women. When a woman is successful, people of both genders like her less.

I believe this bias is at the very core of why women are held back. It is also at the very core of why women hold themselves back. When a woman excels at her job, both men and women will comment that she is accomplishing a lot but is “not as well liked by her peers.” She is probably also “too aggressive,” “not a team player,” “a bit political”; she “can’t be trusted” or is “difficult.” Those are all things that have been said about me and almost every senior woman I know.
(Sheryl Sandberg, Lean In)

The impact for foreign language learners is that while women might learn languages, they may not be motivated to use them to excel professionally because of how poorly they will be viewed by her peers. Although it has been a while, I have been told by both men and women to shut up about my language skills or else I intimidate men. It turns out that I might have not just been intimidating men, but annoying other women.

We might think that subtle signals mean nothing. However, over the course of a girl’s lifetime, she may encounter many situations when people tell her to be quiet, be modest and not outshine her peers, male or female, for fear of not being accepted. As she matures into an adult, she may hold back, water down her achievements and not show her success.

Both men and women have to examine how they treat successful females at any age. Do you encourage them to keep going and learn more? Or do you tell them to be quiet and avoid being “unliked” for being smart, intellectual, outspoken or multilingual?

Watch “Saved by Language” online or on DVD

Ladino saved my life in the war